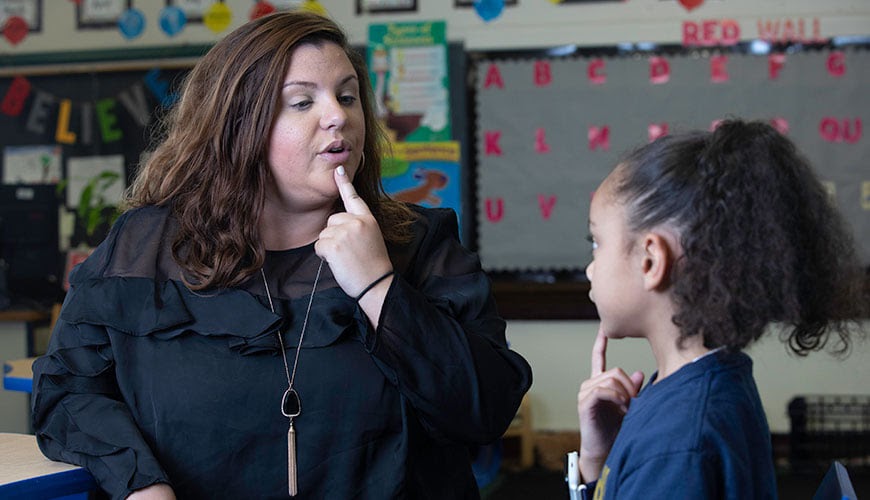 There is a growing need for speech-language pathologists fluent in languages other than English.

This comes as no surprise considering a record 67.3 million U.S. residents spoke a language other than English at home, according to 2018 U.S. Census Bureau data. The number has more than doubled since 1990 and almost tripled since 1980.

Schools, the largest single sector in which speech-language pathologists are employed, are especially experiencing an increase in demand. The National Center for Education Statistics reports that the number of students who are English language learners in American schools increased by 300,000 between 2004 and 2014.

English language learners face particular challenges that speech-language pathologists can help them with.

The language acquisition patterns of bilingual and multilingual children are not necessarily the same as those among monolingual groups. Children aged 3 and younger tend to not differentiate between multiple languages when they are learning them simultaneously. For example, they might say words and language structures interchangeably, which can create challenges when assessing their actual abilities.

There are characteristics that speech-language pathologists can identify to determine impediments among non-English speakers, including inability to produce bilabial sounds, slow word acquisition, mutism and echolalia (repeating what someone else has said).

Speech-language pathologists use the same technology, devices and techniques with English learners as they would with native English speakers. The desired outcomes are the same.

The delivery of services, however, vary with cultural- and language-specific customization. Speech-language pathologists must consider cultural factors. This knowledge is incorporated into practice areas including assessment, diagnosis and treatment. Schools rely on speech-language pathologists to create linguistically and culturally appropriate learning plans for students.

Being proficient in multiple languages offers several opportunities. Language skills are more sought after now than ever. Speech language pathologists with knowledge of multiple languages are viewed favorably by employers because of the communication and problem-solving skills honed from their experience in developing another language.

These professionals have also proven they have the ability to immerse themselves in other cultures and overcome associated challenges associated with that. Cultural awareness, open-mindedness and collaboration are desirable professional skills.

A Career in Speech-Language Pathology